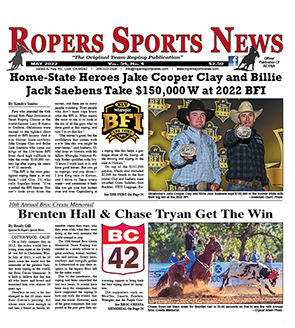 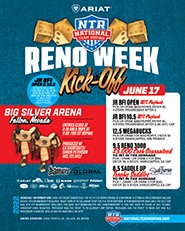 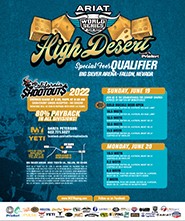 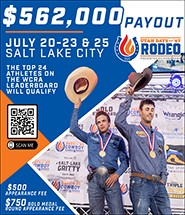 When you’re hot, you’re hot. Arizona’s James Arviso and Oklahoma’s Landen Glenn haven’t had many chances to rope together yet in their young careers. But the 18-year-old high school seniors have already found chemistry, and the ability to come through in the clutch and close the deal when it really counts. Coming from third high call, Arviso and Glenn roped four steers in 32.93 seconds and struck for the $25,000 win Thursday at the 2022 Hooey Jr BFI Open at the world-famous Lazy E Arena in Guthrie, Oklahoma.
If Arviso’s shy grin and humble words seem familiar, it’s because he’s cut from the same cloth as his Uncle Derrick Begay. James is the son of Derrick’s sister, Jamie, and her husband, Jon Arviso.
“My Grandpa Victor (Begay, who’s Derrick and Jamie’s dad) has probably had the biggest influence on my roping,” James said. “He’s been pretty hard on me my whole life, and it seems like because of that things are starting to come along now.”
Roping and rodeo fans will also recognize the buckskin mare James rode to the win at the 2022 Hooey Jr BFI Open. Keta, who’s 9, is the horse Uncle Derrick rode at last December’s Wrangler National Finals Rodeo in Las Vegas. And yes, he’s been borrowing his nephew’s ride and rode her at this winter’s Texas building rodeos in Houston, San Antonio, Austin and Fort Worth.
The ropers James looks up to most—Uncle Derrick, Aaron Tsinigine and Erich Rogers—should come as no surprise. James and his family share the same hometown of Seba Dalkai on the Navajo Nation with Derrick. But true to family code, Arviso didn’t care to take much of the credit for the big win.
“Landen does his job really well, so I just try to do mine,” said James, who hopes to get to the NFR one day. “This is definitely one of my biggest wins. I don’t win first a lot. I’ve been coming here the past three years, and this is the first time to win it. The steers were fast and strong, and the barrier was out there a ways. They dang sure put on a good roping for us young guys, and make it as realistic as it gets to the big BFI. It’s pretty cool to get my first big win here at the Lazy E.”
Arviso plans to stick his heading half of the money into savings, with the hope of rounding up enough money for back-up for Keta. Glenn also rode a buckskin, and says his horse Jammer, 12, has been a game-changer.
“I got him from a guy in Texas three years ago, and we’ve just clicked,” Landen said. “This horse made me the roper I am.”
Glenn, who lives in McAlester, Oklahoma, will ride Jammer when he heels for Tsinigine in the BFI here at the Lazy E on Saturday. Arviso and Glenn also won the Hooey Junior Patriot Open in Fort Worth about three weeks ago.
“We’ve been planning on roping together here for six or eight months,” Glenn said. “But we haven’t gotten to rope together all that much yet. James is smart, and always does his job. He makes sure he scores go, then goes and catches. He never takes any dumb shots. He makes it easy. I’ve just got to come around there and throw my rope. James has never turned me a steer that wasn’t heel-able.”
Arizona’s Jace Thorstenson and Denton Dunning came from sixth to finish second in the roping with 35.75 to Arviso and Glenn’s 32.93.
“This is one of the biggest ropings I’ve ever won—100 percent—because it’s so prestigious,” said Glenn, whose goals include making the NFR and winning the world. “It’s BFI Week, and we all grew up watching the BFI.”
Glenn’s hero?
“Jade Corkill,” he said. “He’s the best. He’s the man. I always watch him rope. He does everything right, and whether he’s trying to be 3 or 8, it always looks the same.”
It meant something to both of these young guns to get a big win at the Lazy E.
“I love this place,” said Landen, who also hopes to put his half of the cash toward additional horsepower. “I’ve won more money at the Lazy E and John Justin Arena (in Fort Worth) than probably anywhere else. I’ve won more at those two places than everywhere else combined. I only live two hours and 20 minutes from here, so the Lazy E feels like home.”
Hooey JR BFI Open Results
Average: 1. James Arviso and Landen Glenn, 32.93 seconds on four head, $25,000; 2. Jace Thorstenson and Denton Dunning, 35.75, $17,000; 3. Mason Appleton and JR Gonzalez, 35.93, $12,500; 4. Cole Smith and Michael Eugenio Calmelat, 36.6, $9,000; 5. Kyler Beshirs and Belden Cox, 41.34, $7,500; 6. Cutter Cain and Trey Moore, 41.34, $5,000; 7. Shye Pate and Catcher Gasperson, 43.53, $4,000; 8. Eli Green and Chase Helton, 45.13, $3,000
First Round: 1. Zane Collins and Chase McGuire, 6.68, $2,400; 2. Mason Appleton and Landen Glenn, 7.11, $600; 2. Brayden Schmidt and Logan Cullen, 7.11, $600
Second Round: 1. Cole Smith and Michael Eugenio Calmelat, 6.42, $2,400; 2. Jake Jet Toberer and Cashton Weidenbener, 6.77, $1,200
Third Round: 1. Cole Smith and Denton Dunning, 6.44, $2,400; 2. Raesh Casebolt and Nicky Northcott, 6.47, $1,200
Short Round: Daxtyn Feild and Howdy Jackson, 9.08, $2,400 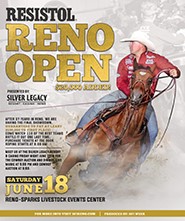 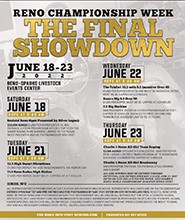 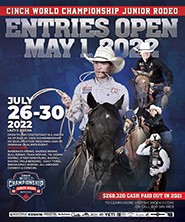 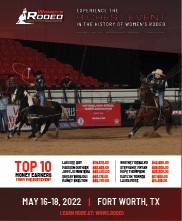