Scoring is one of the hardest; most complicated and debated aspects of team roping.  Everyone has their own ideas about scoring and even the top 15 ropers in the world all do things a little differently. This can create some problems when trying a new horse. There are many factors involved, but ultimately it comes down to communicating with your horse effectively.

Throughout my career I’ve had horses that I had to pull on to keep them in the box, and I’ve had horses I just had to keep light tension on the reins. I’ve also had horses I couldn’t pull on at all. There are many methods people use and there is no specific or correct way to score in order to win.

In school, I loved math and angles, which is beneficial for scoring. If you want to get technical, there are many factors that can figure into the equation when scoring. What you’re looking for is a common start that will allow you to get out from behind the barrier.

If the box and the barrier are both 16’, that’s commonly called “the same.” The general rule when it’s “the same,” is a tail by the plate, or a tail by the pin. However, other factors to consider are the size of the steer, the width of the box, and whether you’re riding a horse with a long or short stride.

There is a huge difference between rope barriers and electric eyes. A horse can push a rope barrier up to eight or nine inches without breaking it. An electric eye barrier is broken immediately. It’s a general rule that you allow an extra foot with an electric eye because a steer’s head can go over the eye and he can break it with his chest. If there are two electric eyes, one for the steer and one for the horse, you would allow two extra feet. In that case, where the barrier is “the same” and 16’ – that would mean it’s an 18’ foot score.

There’s a video on my website at speedroping.com about scoring. In the video I break down the methods I use. Being able to score your horse sets up the entire run. If you miss the barrier and are really late, lots of bad things can happen at the back of the arena. If you break the barrier, you eliminate yourself from the chance of winning big money. How you get your horse from the back of the box to the front is a personal preference, but the faster you’re running when you reach the barrier line, the faster you’re going to catch up to your cow. Scoring will usually dictate whether you win or lose when you leave home.

What’s new with me: Currently I’m in California going to some of the rodeos and a lot of jackpots. I’ve loaded all my runs at speedroping.com.

I was at a pretty unique event yesterday. Many people consider Oakdale, Calif., the heart of where team roping started. Yesterday, they had a roping where the header came from the heeling box, and the heeler came from a box next to it, like two heeling boxes. If you’ve never seen this done, it’s how team roping was done in the beginning.

I loaded my runs and the short round of the open roping and they are free to watch. It was a first for me and it was interesting and fun to watch. 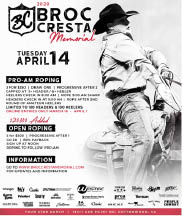