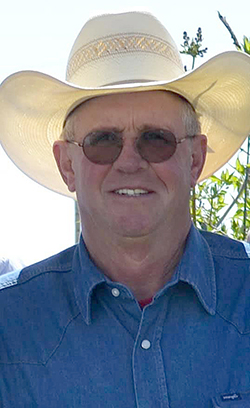 Rob was irresistible. His personality, his smile, the twinkle in his eyes and roaring laughter were contagious. He was everyone’s good friend. He loved his family and would do anything for them. He would do anything for anyone if he could.
Rob loved animals especially his little dog Badger. He was his traveling partner and they had spent 15 years traveling together and loved each other every minute.
Roping had always been the love of Rob’s life. Rob and his dad were roping partners for many years and they thoroughly enjoyed traveling together.  Rob always said his dad was his best friend and mentor.
Rob was a PRCA Gold Card Life member and an ACTRA member. He won saddles, numerous buckles and many awards while enjoying this sport.
Rob was very devoted to God and always said to have faith in God. He often comforted his family and friends with words of faith. We are at peace knowing Rob is now with God and is having fun roping steers with his dad.
Rob was preceded in death by his dad, Bob, and his brother-in-law, Joe Fitzgerald. Rob is survived by his son Jake (Jordan), two grandsons Seamus and Tucker, and his son Galen. He is also survived by his loving mother Garnie, sisters Ronda Mallery (Fred) and Ginger Fitzgerald, and many nieces, nephews, cousins, and extended family.
Graveside services were held  November 13 at the Janesville Cemetery.