Brandi Phillips Is Fearless & Graceful In The Saddle

By Amy C. Witt
Instagram: @caliiforniadreamin
www.caliidreamin.com
This email address is being protected from spambots. You need JavaScript enabled to view it.

She’s captivating and fearless as she gracefully hangs from her saddle, effortlessly moving around the arena with her horse. From Pendleton rodeo to Salinas and Deadwood rodeo, to Canada, Australia, and even performing for Queen Elizabeth at the Windsor Castle in England, Brandi Phillips has an energy and presence that is exciting, inspiring and always makes you stop in your tracks to admire. 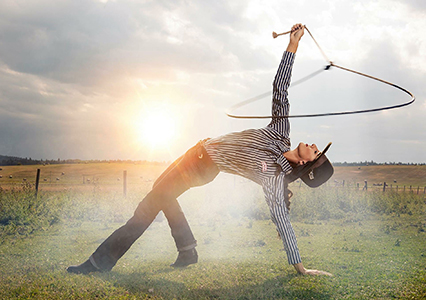 By Amy C. Witt
@caliiforniadreamin
This email address is being protected from spambots. You need JavaScript enabled to view it.

She’s captivating and fearless as she gracefully hangs from her saddle, effortlessly moving around the arena with her horse. From Pendleton rodeo to Salinas and Deadwood rodeo, to Canada, Australia, and even performing for Queen Elizabeth at the Windsor Castle in England, Brandi Phillips has an energy and presence that is exciting, inspiring and always makes you stop in your tracks to admire.
When Brandi was 12 years old, she was introduced to the Riata Ranch and started trick riding. Her mother Theresa Machado rode at Riata when she was in high school and in the summer of 2003, trick riding and roping became Brandi’s passion and she decided to dedicate her life to mastering her craft and performances. Through her trick riding career, she won the 2010 Trick Riding Championship at the Royal Winter Fair held in Toronto, Canada. She has been to Australia twice to teach trick riding, as well as performed at the California PRCA Circuit Finals twice. Additionally, Brandi and the Riata Ranch Cowboy Girls have finished four times among the top five as the PRCA Dress Act of the Year. In 2012, Brandi and the Riata Ranch Cowboy Girls were invited by Queen Elizabeth II to perform at her 2012 Diamond Jubilee Celebration in Windsor, England, in tribute to her 60-year reign. And in February, Brandi was a featured clinician at the first annual Art of the Cowgirl in Phoenix, Arizona. After 13 years with the Riata Ranch, Brandi decided to retire and take a break from performing. Currently, she lives in Arizona working for Judy and Ozzie Gillum full-time assisting in training and selling horses.
Brandi doesn’t just possess the ability to entertain crowds with her spectacular horsemanship, she is an inspiring, talented and phenomenal cowgirl and woman who exemplifies the character trait of working hard to fulfill dreams. Brandi shows us that we shouldn’t be afraid to leave the comfort of our saddle to accomplish our dreams.

Tell us about Riata Ranch
I started trick riding at Riata Ranch when I was 12. Riata Ranch was originally located in Exeter and was founded by Tommy Maier in 1957. It started as a riding school where they had junior horse show teams, as well as rodeo teams. Then, in the 70’s it turned into an all-female western performance team. The base of the program is teaching young students about mentorship, leadership and other life skills obtained while performing around the globe that they can later use in life in becoming the best well rounded adult they can be. I spent my years at Riata as the main performer, trainer, and teacher alongside Jennifer Nicholson who now runs the ranch. I just want to thank Riata Ranch for the great foundation and experiences I’ve been able to have over 13 years. Thank you for giving a young girl an opportunity to do great things!

What do you feel is the most challenging aspect of trick riding?
Trick riding was something I just seemed to always connect well with. I wasn’t a great athlete when it came to sports. I liked sports but nothing ever inspired me as much as the trick riding did. I think the most challenging part for me was trusting a horse after I had good horses. It takes me quite a while before I fully trust a horse, considering some of the harder tricks that I like to do. Your horsepower is so important just like any other event. You really are trusting a horse with your life.

What is your favorite thing about trick riding?
I love the performing aspect.  I love being in front of crowds. For example, Reno Rodeo – the crowd is right on top of you, so when you’re going around dragging in the dirt and the whole crowd just thunders, it’s a pretty incredible feeling. I love making people happy.

How do you mentally prepare before entering the arena?
Honestly, I’m a “Chatty Kathy.” This sounds ridiculous, but I can’t think too much about what I’m about to do. When my adrenalin starts to kick in, I bounce off the walls a little. I think about anything else but, once the gates open it’s game on. I hit the ground ready to fire.

Tell us about your horses
My first trick riding horse was a horse named Cisco who is now an old paint horse still living his best life up at Riata. He was my 12 year old little girl’s crazy first horse love. I had the pleasure of riding a few great horses over my career, a big paint named Willy and a smaller paint named Jesse. Willy was the horse I experienced my first true bond with. Our first show together was at Salinas when I was 14. He loved race tracks and running across the grass at Pendleton. He needed lots of room to run and run he did! Jesse was a black and white paint that catapulted my trick riding. He made me. He was really hard to ride for a long time but for some reason one day we clicked. He made me love trick riding. I knew every time we hit the arena we were at our best. He was that once in a lifetime horse for me. Now, I have a really awesome grey horse named Apollo. He was a charro horse given to Riata because they thought he was too lazy – which he is, until you trick ride. I lost Willy suddenly to colic, and only had a few weeks to get Apollo rodeo ready. He made his debut in the summer of 2012 and has been going ever since. He’s my ride or die. He’s helped me get through some pretty tough times and just has had my back through it all. Now, we just do shows together every now and then. He’s happy to go to work and come home.

Who or what inspires you and why?
My Grandma Linda is a person that has inspired me most in my life. She raised me most of my childhood and had a huge impact on the woman I am today. She always is putting other people’s needs before her own and just loves her family more than anything in the world. She also makes the best chocolate chip cookies.
I’m also inspired a lot by anything in the performing arts, whether it be music, dance or even other specialty acts. Maybe being a performer myself has a lot to do with that, but I just love watching people tell a story through their talents. I think it’s a special gift you get to share with others.

Who is your rodeo idol and why?
Not growing up in rodeo I never really had a rodeo idol. But in the last few years working for the Gillums, I have been able to get to know Clay O’Brien Cooper and rope with him quite a bit. He’s just such a kind human being. His character is something most of us should stride to be. His work ethic is why he is a champion. I can never beat him out the door to get saddled and never once has he ever made me feel like I was less than him just because I was green. I think that’s pretty neat!
Also, my good friend Jaime Hinton-Anderson. I got to help drive her in the Fall up in the northwest in 2016 then up to the Canadian Finals where she won the average and ended up Reserve Champion! Her horse, Goob was bred and raised by the Gillums. Jaime is someone who I have a lot of respect for. I appreciate her knowledge
and always knowing the “why” of things.  She is just a good to the bone friend.
Also, Judy and Ozzie Gillum. I don’t know what I would have done without you both. Thank you for believing in me and giving me the opportunity to rope and ride nice horses!
Thank you to Best Ever Pads, Paige 1912, and Dana Elliot, the maker of BB Tack.

Four things on your bucket list
Travel abroad more! Like Thailand, Rome or Bali.
Learn to play an instrument
Learn a language
Own a pair of Christian Louboutin’s

What advice you could give girls and women?
Be yourself. I always thought this was the dumbest piece of advice, but I wished I had learned this sooner. I’ve always been a bit of an outsider, especially when I was younger. I always tried to change me to fit other people’s ideas of what was accepted. I got so lost doing so. Stay grounded in your beliefs. I don’t care if it isn’t “cool.” Don’t let other people give you a timeline or tell you what you want isn’t possible. Go on your own path and don’t forget to enjoy your life. Oh, also don’t be mean. Being mean is super not cool. 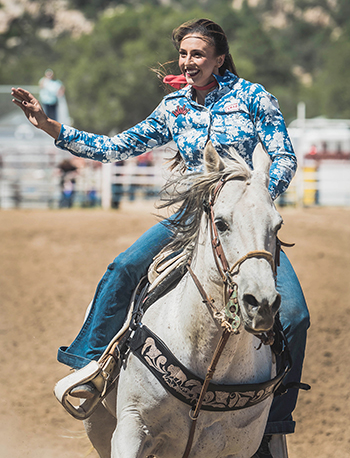