Saying Goodbye To A Long-Time Friend

This last month we were saddened by the passing of my long-time friend and old roping partner Rickey Green. I have known Rickey most of his life and will never forget when I took him on a road trip to several states when he had just graduated from high school. His dad brought him out to the freeway and dropped him off to load up with me in my living quarters trailer. Rickey had chosen his famed horse Cowboy to make the trip with us. Cowboy was very young at the time and probably didn’t weigh 900 pounds. We loaded up and headed north to Oregon, Idaho, Colorado and other states and ropings in between. We hadn’t been on the road long before Rickey got quite homesick as he had never been away from his family more than a day or two. 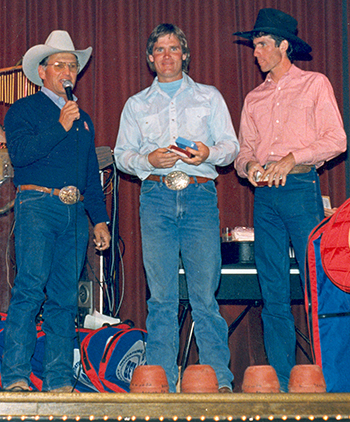 We had a great run and roped at many different arenas and ranches. In John Day, Oregon, we introduced Rickey to corral roping at a branding at the John Forrest ranch. After about a hundred head later, we had to let Rickey know that he had to work the ground a little and just couldn’t rope all day. I think his horse was glad we introduced Rickey to the ground crew. Rickey had also brought along an antique 22 rifle so we got in some ground varmint shooting too, until his gun fell apart. We had a blast on that trip and won some money and prizes.
When Rickey and Mark Arnold won the Bob Feist Invitational in 1984 (see photo), it was very personal as I had known both of these ropers since they were kids. Now they are both gone, and roping at the big roping in the sky. Mark (Pickles) preceded Rickey in death on Oct. 9, 2004.
The year Rickey and Mark won the BFI, it was outside and paid over $35,000 in cash and awards. The Peppermill’s Western Village of Sparks was the head sponsor. New two-horse Charmac trailers topped the awards list along with $18,000 cash for the team. They roped their six steers in 57.99 in the outdoor arena on the Reno Rodeo Grounds. The score was 18 feet.

Another sad loss was the passing of The Hork Dog Roping in Las Vegas after 18 years. Charlie Horky has always been a friend to rodeo contestants over the years and housed many of them since the Wrangler National Finals moved to Las Vegas. The Hork Dog is just another one of the big Open Ropings to fall by the wayside in the team toping world this past two years. Not long ago, we lost the George Strait Roping which had been one of the big ones for years. For the record, the BFI is still going strong and is looking stronger than ever for 2019.

Well, the field is set for the Wrangler National Finals and congratulations to all who made it for 2018. The South Point Hotel and Casino will again host many of the great events during the two weeks of the Finals. Their biggest attraction to team ropers will be the World Series of Team Roping Finale which will play host to hundreds of team ropers throughout the world in one of the biggest payoffs in team roping history. Good luck to all of those who qualified. It is always a pleasure to watch the World Series crew in action as they cater to all of the phases of this production. My Resistol is off to them.

Don’t forget to vote this year, regardless of your political views.