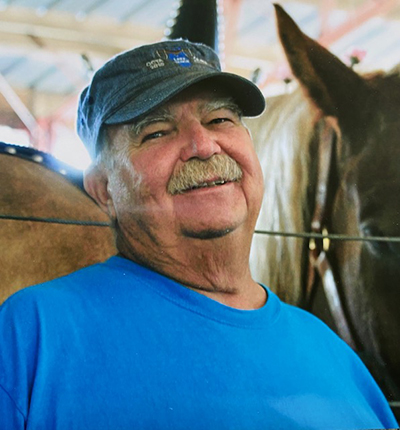 Bill Adams, 75, of Fallon, passed away peacefully at his home on August 11, 2021.
Bill and his wife Claudia were part of the California and Nevada team roping hub for many years with Bill announcing and Claudia running the ropings. Bill also was a many time announcer of the Bob Feist Invitational.

Bill worked for Nevada NDOT for some 30 years plus, at the end of that time he was head of safety and heavy equipment training for District 3.
Bill loved traveling, fishing, and camping while spending time with family and friends. Bill had many varied interests. His love of people showed in all that he did, which included announcing many western event Rodeos, Team Roping and Mule Shows. He always did his best to make all the contestants feel special.
A huge part of Bill’s life was his mules, especially Ruth and Rita. He became a very accomplished Teamster and Wagon Master. He was World Champion Teamster two years running at the Bishop Mule Days, winning many more awards at various mule shows. He headed up the Wagon Train from Lovelock to Fallon across 40-mile desert for many years.
His passing has left a big void in many hearts. A celebration of life service will be held October 2 at 1pm at the Rio Vista Drive Airport Hangar, #B-5 in Fallon.
Bill is survived by his wife, Claudia; children, Brandi and Paul Hatfield of Oregon, Roxann and Travis White of Fallon, Don of Missouri; grandchildren, Fiona White, Kayetlynn and Gabriell Hicks, Tristin Adams.
Arrangements are under the direction of The Gardens, 2949 Austin Highway, Fallon, NV 89406.