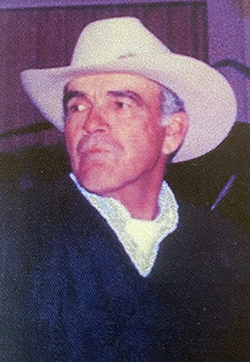 After graduating high school, Joe joined the United States Air Force and served for four years. He then returned home to Watsonville to help run the family ranch.
In 1951, he married his wife Jean and they raised three sons, Jody, Chris and Shawn.
Joe owned and operated Perry’s Roping Arena on Smith Road in Watsonville for many years during the 1970s and ’80s. As a young man, Joe competed in Bareback Riding and Bull Riding, but Calf Roping and Team Roping became his favorites. He enjoyed traveling to ropings to compete with friends and family. He was a PRCA Gold Card Member. He enjoyed the western lifestyle and lived it every day.
Joe was preceded in death by his parents, his sister, and grandson Ryan. He is survived by his wife of 70 years, Jean; sons Jody (Cindy) of Hollister; Chris (Claudette) of Oakdale; and Shawn of San Francisco; grandson Joseph (Michelle) of Hollister; granddaughter Ashlee Wambold (Troy) of Tacoma, Washington, seven great-grandchildren and numerous nieces and nephews.
A celebration of life was held October 15 at St. Benedict’s Catholic Church in Hollister. of Fallon, Don of Missouri; grandchildren, Fiona White, Kayetlynn and Gabriell Hicks, Tristin Adams.
Arrangements are under the direction of The Gardens, 2949 Austin Highway, Fallon, NV 89406.